Cathedral of the Sacred Heart 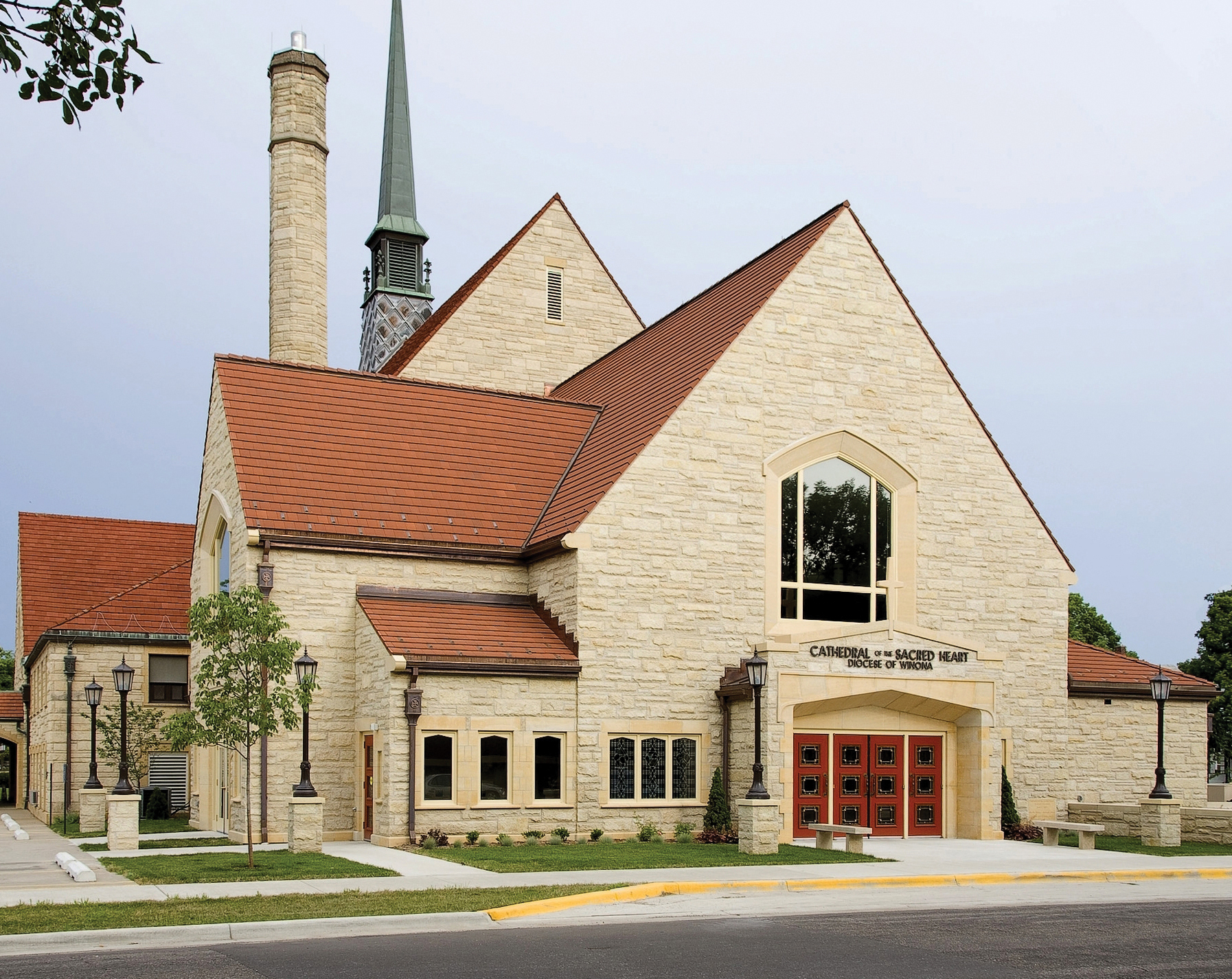 History (updated from The History of the Diocese of Winona, 2014, Editions du Signe)

The first Catholics, of Irish and German descent, came to Winona around 1854. As early as 1841, Father Augustine Ravoux visited the site of Winona on one of his journeys from Saint Paul to Prairie du Chien. In 1856, Bishop Joseph Cretin, the first bishop of Minnesota Territory, visited Winona and offered the first Mass of Which there is a record at the home of Mr. and Mrs. Thomas Urell. At that first Mass, all the Catholics of the vicinity met and a parish was organized.

In 1857, Father Thomas Murray visited and attended to the needs of the new parish. Father Murray selected two lots on Dakota Street to erect a two-story frame building to serve as a church and temporary parochial residence. This practical design was altered and the church erected for church purposes only. It was dedicated to Saint Thomas the Apostle. Father Anatole Oster visited the mission and succeeded in 1857 in completing the church.

In July 1858, Father Michael Prendergast became the first resident pastor in Winona. Since the original site of hte church was found to be too far south and west for the majority of parishioners, a 60-foot frontage on Wabasha Street was purchased on July 29, 1861. During the moving of the church to the center of the city, which occurred from April to June 1864, the parishioners attended the newly erected Saint Joseph Church (1862).

On the departure of Father Prendergast early in 1864, Father James Morris attended to the missions in southeastern Minnesota until Father William Lette was appointed pastor for Saint Thomas Parish in April. Father Lette had all the Catholics of the county under his charge until June 1868. During his administration, the parish bought the land between the church and Center Street, and the foundation of a new church dedicated to Saint Thomas was laid. Father Alois Plut completed the major portion of the church, whose cornerstone was placed by Bishop Thomas Grace, bishop of Saint Paul, on August 28, 1870.

In June 1871, Father Joseph Cotter assumed the pastoral care of Saint Thomas Parish, and the mission at Saint Charles, Hart, Lewiston and Ridgeway were attached shortly after. He remained in charge until December 27, 1889, the date on which he was consecrated the first bishop of Winona. During the administration of Father Cotter, much progress was made. Debts were paid; the church was completed; additional lots on which the old convent and rectory once stood were acquired in October 1873; and a new parochial school was built on Wabasha Street to the west of the church.

When Father Joseph Cotter was appointed the first bishop of the Diocese of Winona, Father Peter Gallagher became pastor of the parish. From this time on, the church was called Saint Thomas Pro Cathedral. Father W. E. F. Griffin succeeded Father Gallagher in December 1911 until August 1913, when he was named the first rector of Saint Mary College.

Father John Sherman became the pastor on October 12, 1913. On the occasion of the golden jubilee of the building of hte church structure, he completely renovated the parish buildings. In early 1925, Father Louis O'Day succeeded Father Sherman. During his pastorate a new school was built and a sisters' convent purchased at 63 East Wabasha Street.

In 1924, Monsignor O'Day was succeeded by Monsignor Robert Jennings, who remained as pastor until April 1, 1951. Monsignor Joseph Hale was named the parochial administrator of Saint Thomas Parish.

Catholic residents of all nationalities attended the first Catholic church in Winona. At this time, the number of Catholics of German descent was small, but there was a desire among them to have a church and, especially, a priest who would continue to instruct them and their children in their native language. On August 15, 1858, the small group took the first step toward their ambition when they elected a committee to secure a site for a church. They decided to purchase a lot on the corner of Fifth and Walnut Street for $400. Two hundred dollars was to be paid at once, so Mr. George Hornung agreed to loan them the money until they could collect $200. The site was purchased on September 8, 1858.

It was not until August 5, 1861, that the sum of $400 was collected. For some months, the committee acted under the guidance of the Father E. Essing of Caledonia. When Father Theodore Venn arrived as the assistant pastor of Saint Thomas Parish, progress was made. A committee was appointed to secure the stone for the foundation and walls of the church after obtaining permission to build the church from Bishop Thomas Grace of the Diocese of St. Paul. The building was completed in November 1862.

Father Theodore Venn became first pastor on August 12, 1862, and remained until October 15, 1863. From then until April 1864, Father Michael Prendergast of Saint Thomas Parish was in charge of the parish. Father William Lette became the second pastor, remaining until 1868. He was succeeded by the Father Alois Plut from 1868 to 1876. He enlarged the parochial school and church in 1871. Missions were established at Wilson, Elba, and Rollingstone. Father F. C. Walter succeeded Father Plut and remained as pastor until February 1878.

On February 11, 1878, Father A. Heller became pastor. A new brick and stone church was begun under his direction in 1881. The corner stone of the new church was placed on April 30, 1882, with Bishop John Ireland of Saint Paul Diocese officiating. The building cost $22,000 without fixtures, and the completed structure cost $40,000. A new rectory was also built at this time at the corner of Fifth and Lafayette Streets. Father Heller was succeeded in 1885 by Father John Meier. During Father Meier's pastorate, the existing debt on the new church was paid. In 1918, a new brick and stone rectory replaced the old frame structure. During this time, stained glass windows were put in the church and a central heating plant was installed to service both the church and school. Monsignor Meier was succeeded by Father George Jaegen, under whose guidance the parish grew to over 300 families. Father Jaegen directed some very necessary repairs and alterations in the church buildings. The church was redecorated, an air conditioning system installed, and a new roof put on each building. Father Jaegen retired in 1937, and the assistant pastor, Father Alphonse Diekman, took charge until August 30, 1938, when Father B. A. Kramer was appointed pastor. During Father Kramer's pastorate, a rectory was purchased at 103 East Fifth Street at a cost of $10,000. The former rectory was remodeled as a home for the Sisters of Saint Francis, who were in charge of the school. The old quarters of the sisters in the school building were remodeled for school purposes.

The inadequacy of the Saint Thomas Pro Cathedral to meet the needs of the growing Diocese of Winona became more and mroe apparent as time went on. In 1944, a fund was begun to raise money for the construction of a new cathedral for the diocese. As the fund drive neared completion, discussion began for the merger of Saint Thomas Parish and Saint Joseph Parish to form the Cathedral of the Sacred heart. On June 15, 1950, the Vatican granted a petition to unite the parishes, only four blocks apart, but long separated by language and nationality. On October 25, 1952, Bishop Edward Fitzgerald consecrated the altar and celebrated the first Mass in the Cathedral of the Sacred Heart.

Liturgical directives of the Second Vatican Council necessitated an updating and renovation of the cathedral, which began in the fall of 1979 and concluded in February 1982. These included acoustic improvements, installation of a new pipe organ, and remodeling of the sanctuary. Also, the cathedra (chair of the bishop) was moved, as were the shrines of Mary and Joseph. Along with this, the main altar was reduced in size and brought forward.

In January 1999, Bishop Bernard Harrington was installed as the seventh bishop of Winona. Under his guidance the Cathedral of the Sacred Heart entered its second half-century in the Year of Jubilee 2000. The Cathedral of the Sacred Heart underwent another major renovation starting in 2005. This included the remodeling of the church space, the addition of an adoration chapel, and a gathering space. The newly remodeled cathedral was rededicated on June 5, 2007.