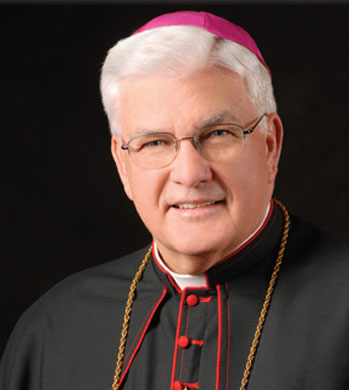 Bishop John Michael Quinn was born in Detroit on December 17, 1945 and grew up in Our Lady of Good Counsel Parish, on Detroit’s eastside. He was the youngest child of the late George and Mary Quinn.

Bishop Quinn was ordained to the priesthood on March 17, 1972 at St. Raymond Parish, Detroit, where he had served as a deacon.

His pastoral assignments include, associate pastor of Our Lady of Sorrows Parish, Farmington, and pastor of St. Luke Parish, Detroit.

From July of 1990 to July of 2003, Bishop Quinn served as director of the Education Department of the Archdiocese of Detroit. He was the Cardinal’s delegate to Sacred Heart Major Seminary, Detroit and was an adjunct member of the faculty for twenty years and a part time spiritual director.

Bishop Quinn was designated a Prelate of Honor with the title of Monsignor by His Holiness Pope John Paul II in 1990.

Bishop Quinn was Ordained as the twenty-third Auxiliary Bishop of the Archdiocese of Detroit on August 12, 2003 at Detroit’s Cathedral of the Most Blessed Sacrament.

In October of 2008, His Holiness Pope Benedict XVI named Bishop Quinn as coadjutor and eighth bishop of the Diocese of Winona-Rochester in southern Minnesota. He was welcomed at the Cathedral of the Sacred Heart in Winona on December 11, 2008.

Saint Mary's University conferred an honorary doctorate in Pastoral Ministry upon Bishop Quinn at a university convocation on August 27, 2012.

In recognition of his inspirational dedication to and support of the De La Salle Christian Brothers, Bishop Quinn was named an Affiliated Christian Brother on August 25, 2021, in the Brothers’ residence on Saint Mary’s University Campus in Winona.

Board of Trustees of Catholic Institutions